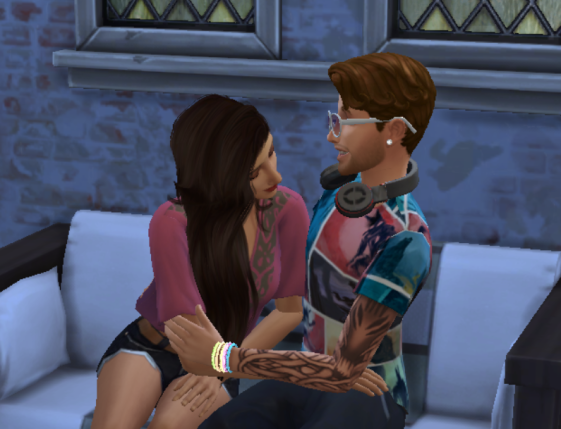 Maybe she really doesn’t know anything about the Scarlet Thorns? I thought quietly, discreetly running my eyes over her as she made out with that new guy of hers. I mean, if she did, wouldn’t she have given SOMETHING away by now?

My eyes rolled over her body as she laughed, slapping the guy’s arm playfully before cuddling up to him, a warm smile on her face. Her hair flipped over her shoulder when she turned to look at me, her eyebrow raising.

“Oh, come on. Don’t be jealous, dearie. You’ll find somebody as good for you as he is for me some day. I promise.” She said through a bit of a giggle.

“Whoever said that I was jealous?” I replied, unable to help myself from smiling a bit as I turned back to the dish in front of me.

“It’s the way you look at me.” She replied, her voice low, teasing. But I could sense a hint of a threat in her voice, warning me to not come near her man.

Rolling my eyes, I shook my head. “Oh, whatever. Maybe it’s him that I’m jealous of, hm?” I replied. “Every think of that?”

Before I knew what was happening, a pair of arms wrapped around my midsection, startling me enough to drop the dish I was making right onto the stove.

“Well, you can have me all to yourself if you want. All you have to do is ask…” She whispered in my ear, her voice low and tempting.

Shrugging her off, I shook my head. “I don’t swing that way, girlie. Now let go before this whole house gets burned to the ground.” Raising her hands, she smiled slightly. “Alright, fine. But I’m not the one who turned you down.”

“Go back out to your boy toy. I’m sure he’d love some attention right now.”

Skipping out of the kitchen, I could hear her voice ringing throughout the house while she called for him. Goodness, what was I going to do with her?

Dinner passed, and immediately after, she took her boyfriend to the bedroom. It was as if the whole house shook with the… Game they were playing upstairs. I had to turn up the tv to tune out the noises they were making, and was just about to fall asleep. Why did her boyfriend have to come over tonight, too? I just wanted the two of us so that I could try one more time to get something out of her.

My phone rang, startling me out of my half slumber. Shit, that was my boss’ ringtone… Quickly, I pulled the phone off the counter and went to answer it.

“You weren’t sleeping on the job, were you?”

Glancing around the place, my skin crawled. How did she know?

“I’m getting close. I know it.” I replied finally.

“You better get closer fast. You’ve already wasted three whole months. How much longer are you going to take to even find a member?”

“You sent me on this mission for a reason.” I reminded.

“And you’re testing my faith in you.” With that, a click sounded on the other end, and I was left alone. Three whole months wasted… And what have I found? Nothing. Absolutely nothing.

“Hey, Sarah? Wanna go out for some coffee?” I asked through the door, knocking again.

I heard a groan, followed by a hold on. A bit of shuffling later, and the door finally opened to reveal a hastilly dressed Sarah.

“I said, do you want to go out for some coffee? You’re all out of coffee, and I figured you might want some coffee before we go out today… What do you say?”

A moment later, she sighed. “Yeah, let me get ready and we can go. But you owe me for waking up so early.

“What even is that?” I asked, pointing to the vomit-looking thing she was drinking.

“It’s a unicorn frappacino.” She replied, to which I rolled my eyes.

“Can’t you be normal and get, like, a latte or something?” I asked, holding up my own latte for her to see.

“Whatever. Anyways, can we talk for a minute?”

Sarah gave me a wary look, frowning. “About what?”

A dark frown crossed her lips. “Why are you so desperate to know about my brother? He disappeared years ago, okay? I haven’t heard from him or seen him in forever. He’s probably dead, knowing the idiot. What more do you want from me?”

“But what if he isn’t dead? What if he’s out there somewhere, w-”

“Why can’t you just drop it?” She snapped.

“Because I need to know, Sarah. You’re my only chance t-”

“You know what? Forget it. We’re done here. It’s obvious that you don’t care about me…” She said, standing. When I tried to stop her, some guy stepped in front of me and telling me to back off. I watched her storm out of the coffee shop and into her car.

My phone screen lit up, buzzing obnoxiously and only adding to the pounding in my head. Who in their right mind was calling me at 6 in the morning? Only Paige would do that, but I blocked her number…

Slapping my phone into silence, I rolled over, hoping to get more sleep. Of course, that too was interrupted by my phone going off again. And again. And again. When Carson told me to shut my phone up, I finally gave in, picking up the device and carrying it out into the hallway.

“Whaaaaaaaaaat? Can’t a girl get any sleep around here?!”

Short Stories by Laura
Marked
The Madness of Mr Goth

When things are not what they seem.

A simlit drama based on the I'm A Lover Challenge

Simming life for the world to see

Simming life for the world to see